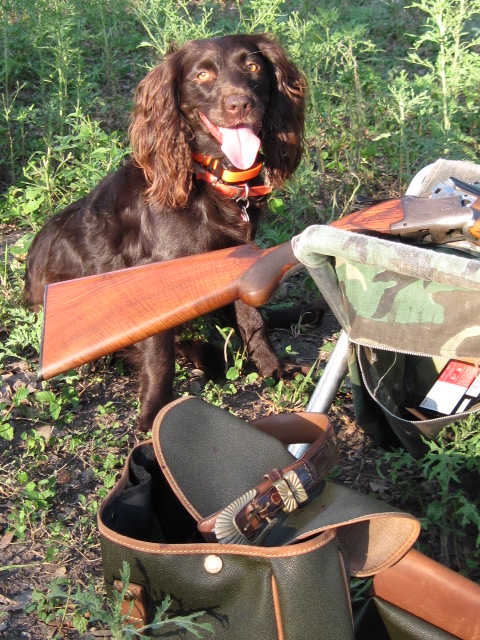 A Texas Dove hunt always signals the start of our Fall shooting season.  It is looked forward to by me as much as the coming of the Christmas Season.  Preparations are made, traditions are anticipated and each season we try to add a little something unusual to rival a previous hunt.  And with one special gentleman, I always sing in September, “It’s beginning to look a lot like Christmas…” ah! tradition!

Texas is mostly private land, so in addition to private hunts, we lease land for specific hunting and fishing:  Dove, Quail, Hog, Deer……  There are also day leases available, but can be very crowded with unfamiliar hunters.  I am fortunate to have several buddies I have shot with for well over 35 years and when we have birds we include each other in the best spots.  And always, frivolity, food, drink and dogs are part of the mix.  We hunt Mourning doves and White -Wing doves, the latter being a little larger and have a white band on their wings.  The Mourning doves are very sporting to shoot as they fly fast and dip and dive when they discover you.  They are also a favorite food, and the most popular way is on the grill: breasted, stuffed with a jalapeno and wrapped in a small piece of bacon– a Monday night given during the season.  We have special dove seasons or zones set up in Texas.  In the early years you had to travel way south and into Mexico for White-Wing hunts, but in the later years they have migrated into central Texas so that now they are included in our bag limits.  A mixture of either dove make up the current 15 per day limit.  White-Wing have become so pervasive and intrusive in the city we call them, Pigs with Wings!

We shoot doves in fields and around stock tanks and on brush lines, either coming to food (sunflowers, croton or peanuts) or returning to the roost.  I usually shoot a .28 superposed Browning that was a gift from my husband right before the birth of our first child in 1987.  A matched pair of .20ga barrels came in the set from the early 1950’s.  Ah tradition!  Last year I became particularly fond of a .410 we have and hope the season will permit a few chances with it again.  A relatively new addition is a decoy called a MOJO, a plastic dove on a stake with mechanical wings – I was hoping for one for my birthday!

It is usually very hot in September and so we dress, select food & drink and care for our dogs accordingly.  The Western Diamondback, or Texas Rattler is a nervous and aggressive and all too common poisonous snake that can be deadly at any size.   I wear tall snake boots or leggings and take my dogs to ‘avoidance training’ where live, de-fanged snakes are used in tandem with an e-collar.  This may seem harsh, but it saves lives, and not harsh if you have ever witnessed a struck dog as I have.  Also, our vets now offer a snake  vaccine that I give my dogs as well.  This year the heat has been particularly excruciating, as I write this we have had over 55 days of temperature over 100 degrees Fahrenheit.  And we have been in the highest level of drought –Exceptional, with no significant rainfall since November 2010, but as the guns are being cleaned and put away, wet terry wash cloths that have been frozen in plastic bags are a welcome respite from the sun.

We Texans love our dogs, and the Lab has proved a Texas favorite for years.  About 27 years ago I was introduced to the Boykin Spaniel by a close friend, neighbor and hunting mentor to my husband.  As a small boy, my husband enjoyed hunting and fishing with his father – but these trips were to be few as his father passed very young.  A close friend & neighbor took the boy under his wing.  When I joined the family, this man embraced me as well, introduced the Boykin and we all enjoyed many years afield together.  I have had a Boykin ever since and currently have two as well as a rescue Lab/Golden Retriever mix.  The Boykin is an American Breed, ca. 1900 and still classified as a ‘rare breed’, a native to South Carolina as well as their state dog.  A little liver colored dog with big expressive golden eyes, small enough not to rock a boat, an aggressive retriever, ready swimmer and the most charming and reasoning buddy in or out of the house!

As I said before I have been fortunate to hunt with the same crowd for many, many years.  More often than not I am the only gal on the hunt and have always been welcome – as long as I can take the pranks and willing to put up with equal treatment.

We always bring lots of snacks to enjoy with the sunset in the field, such as, Cheeses, dried venison sausage, pickled okra and crackers.  This year my brother-in-law surprised us with a small folding table to replace the ‘ice chest’ and ‘tailgate’ tables of the past.  I am passionate about the sporting lifestyle, as well as, my inherited collections of hunting and fishing memorabilia-that were the inspiration for my business, Heritage Game Mounts, www.HeritageGameMounts.com I am always on the lookout for new antiques to add to my collections, and this year I found the perfect vintage ‘gunning’ barware to dress up the table while in the field!

Another tradition of mine that ya’all across the pond sent our way-is my favorite après dove hunt beverage – The Pimm’s Cup!  Over 30 years ago on a hot, deep south Texas Dove hunt in the valley, my favorite duck hunting mate,  introduced me to the finest, most refreshing drink ever, a Pimm’s, Ginger Ale and lime!!!  The vintage barware, traditional drink, a heritage Browning along with best friends was a celebration to be sure. Ah! Tradition! Ah! Heritage!