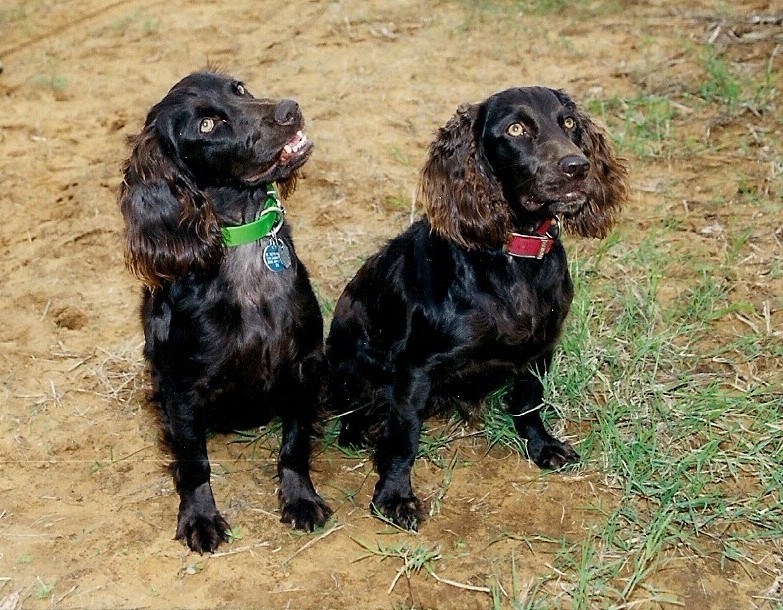 This article was first published in the Boykin Spaniel Magazine, January 2013.

Sister Cayce’s Kate was born 9-9-99 out of Mr. Mick and Kelly Ann from Dixie Blair.   Life dealt Kate many setbacks, but you would never know it by her.  I have a good friend here in San Antonio that has always helped me find my Boykin hunting companions for the past 30 years.  Kate was the little sister to his Cayce.  Even two years apart they looked like twins and both came to hunt Texas from South Carolina. As all Boykin owners know, each one is exceptional.  Kate had her puppy lessons with Pam Kadlec before becoming ours at 4 months. And from the moment she arrived we were her people. One of my first recollections is of my husband returning from a deer hunt, as he was unloading in the garage and placing his things by the front door we missed the pup- but found her fast asleep draped over the gun and bags on the floor in the entry. She was the only dog he ever ‘allowed’ in the house.  One of her jobs was to fetch the morning paper then go upstairs to wake the children. She loved 2 of my kid’s stuffed toys that they slept with nightly. Each morning she would retrieve those fallen toys by their bedside and wake the kids up with them. Kate was not allowed on the beds, but by the time I made it upstairs both Carter and Carrie had strange dents all over their bedspreads and both were awake and giggling. We often found Hoodoo and Leo the Lion mysteriously hidden in Kate’s toys.

Kate was eager and so easy to work and hunt with.  She had my back with doves, she would watch and whine and dance in place with her two front paws when she saw a close one, and if I did not shoot at the ones she was watching – she would let me know with a BARK.  She LOVED to hunt and most of all swim.  She was a noisy, playful swimmer when she wasn’t on the job.  She would swim in circles for hours pawing at the water to make big splashes and then barking and biting at the water. People who did not know her thought she was drowning.

At 18 months we took her on a trip to the coast – I just knew she would love the beach – and she did.  She ran and ran and jumped the waves and caught her Frisbee.  But something went wrong….the next morning we went for our walk and she had trouble, I thought she was sore from all the activity, but by that afternoon it was evident something was terribly wrong –she could not move her back legs.  We were in a small town and I called the vet – by my description he said we needed a larger facility and set us up with an emergency room in Corpus Christi about an hour away.  We left everything and the two other dogs behind with my parents, except our two small children who insisted on going to be with Kate.  The diagnosis there was immediate surgery within 24 hours to have any chance, although small to ever walk again.  The nearest place to do this delicate and tedious surgery was in San Antonio- they along with our vet in San Antonio arranged for our immediate arrival.  We arrived about midnight or shortly thereafter to turn her over to Dr. Andy Anderson.

The weeks after surgery were slow and turned into a couple of months, I devised a sling so I could hold her hind end up and she could walk outside on her front two legs.  I worked her limp back legs often, Kate seemed to understand.  One day as I was talking to her (a Boykin understands) I thought I saw her tail move slightly.  Then later that day she did it again when I spoke to her.  Little by little she came back, but I was told she would never hunt again, and there was always the chance for the opposite side of her spine to ‘blow out’.  Well, 6 months into recovery it did and another surgery and another long but successful recovery.  Her chest and front legs became strong and wide and swimming was good for her.  Her hips and back legs were always a little stunted and weak, but she got around and did not think she was different from any other dog.  She could not jump up and I would not let her jump off of anything or take the stairs. Kate now became a regular at the horse shows  – making friends with all the people, dogs and horses-she never knew a stranger – and made everyone smile at her adapted run that looked more like a rabbit than a dog.

But, she missed the hunts.  I went to great lengths to not let her see me in my hunting clothes or wait to put on my boots in the car.  I always read too much into my dog’s heads…one day I took her with us for a short controlled outing to introduce our children to quail hunting.  When it was time to go on our march, I had her safely secured to wait for us.  About 30 minutes into it I heard this barking and turned around and there she was!  She moved ahead and gave me this look like ‘got here as quick as I could!’- it was too far to take her back and I still don’t know how she got loose and not hurt herself. Thus, for a while she got to go on the occasional ‘gentleman’ dove hunt.  It wasn’t long before we discovered she had an enlarged heart. Didn’t stop her, she still got to go swimming at the lake.  Then there was the surgery for bladder stones.  Another recovery, but each time a little weaker.

Even though the scar tissue gave a little protection to her delicate spine, I was warned the slightest blow could undo everything and there would be no more surgeries.  Our older Boykin, Dash passed away at 16 yrs. and a short time later our little white rescue dog leaving Kate alone for animal pals.  She quickly adopted our three cats who now felt safe in the backyard and I had decided a new puppy could be dangerous – until we had to help house sit a friend’s young dog.  I tried to keep them separated, but by day 2 Kate had figured out a way to play, protect herself and make the pup do all the work.  Enter 8 week old Boykin Belle who my daughter and I drove to SC and brought back.  Kate took Belle under her wing.

We have had many fosters come and go and Kate was my helper.  We found three tiny lab mix pups on Easter 3 years ago.  I watched out the window as she acted like they were not there, and one by one they crept into her bed while she held her nose in the air looking the other way.  As they went to sleep she turned and gave them each a bath.  We ended up keeping one of these pups and Sage idolizes Kate.  It made it easier to take Belle hunting and leave Kate behind.

Kate loved guns, but could not stay in the backyard when fireworks or thunder sounded.  One day when we were out of town she got out and Sage followed her, Belle stayed put.  New neighbors found them and told me they must have been out a while. They took them in but Kate wanted to move on, but the tuckered out pup could not go on.  They said it wasn’t long before Kate returned and stayed beside Sage as she slept.  Now this huge pup is taking over the nursing care of Kate as she gets weaker.  Kate’s last prognosis is a mass of tumors in her intestine, her eyes are weary, she won’t eat and she is telling me she wants to move on.  She won’t make another surgery.  Over her 13 rugged years she always moved on, her limitations not noticed by her accept for her obvious embarrassment at her incontinence due to her back.

Katie Scarlett died today on 7-17-2012.  On this day she got to ride shotgun in the front seat with the windows down and go to the lake with me-alone, no other dogs.  She made 3 tiny laps in the water, and 3 very small retrieves, watched birds on the deck with a cool breeze and oh yes, got to eat cat food.  Hoodoo and Leo the Lion had both made hospital stays with Kate during her first, long ago recoveries. My now married son called last night, he remembered where Leo was after all these years and asked that Leo once again be with Kate.  Sadly, Cayce had gone on ahead a few months before. This year at Christmas we will have a very special new ornament on our tree -as our pets before her, each has a red ribbon tied to their tags or collar and hung on the tree – to celebrate our exceptional gift of Kate.