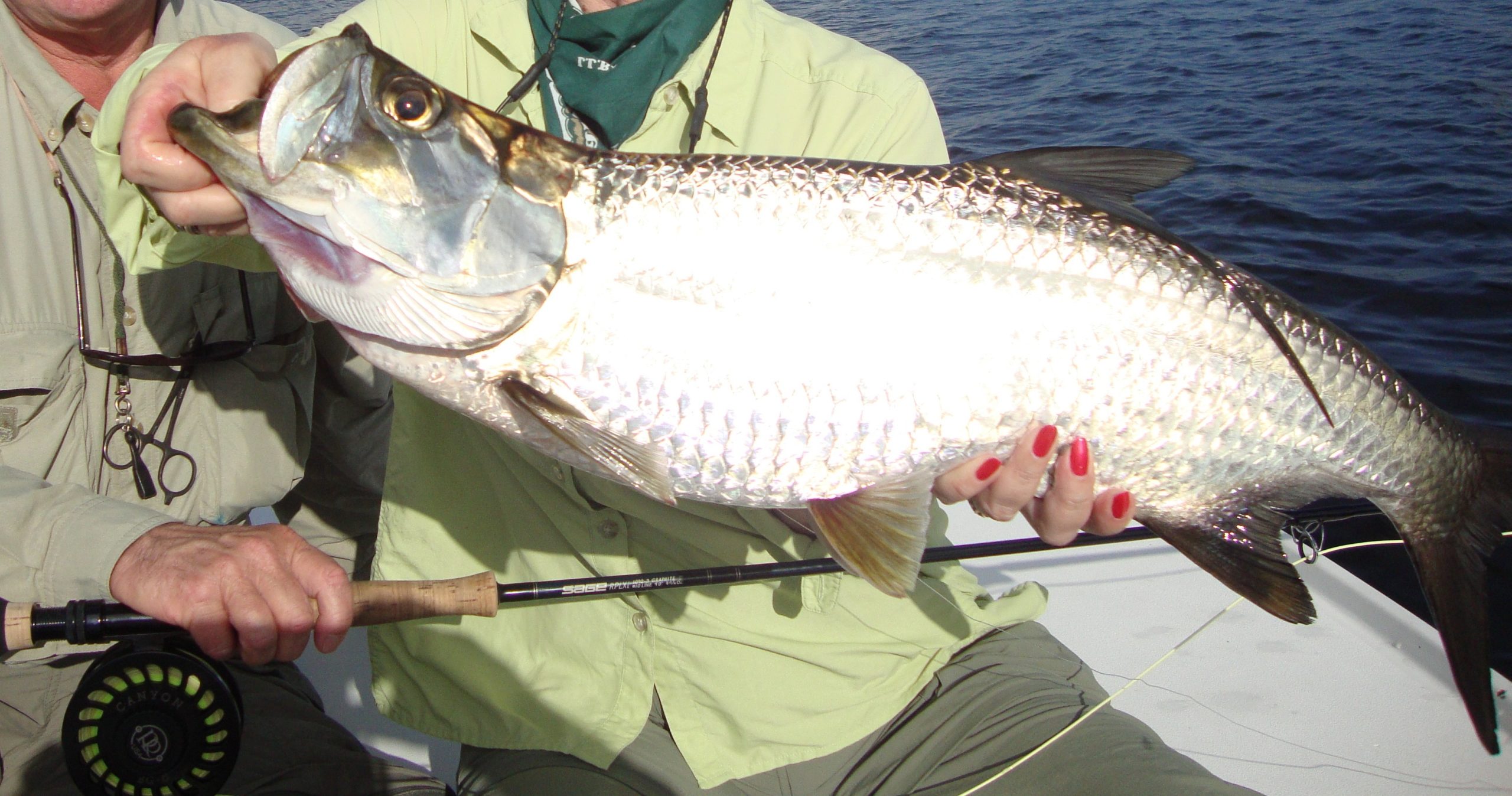 Where the Sky Begins  (Sian Ka’an) is what the ancient Mayans called this Unesco World Heritage site and where our azure adventure also begins. We learned about Casa Blanca through our friend and guide Doc Thompson of High Country Anglers www.flyfishnewmexico.com based in Ute Park, NM – he helped us with all the arrangements.  Doc is a longtime friend of Rita Adams, who grew up fishing NM with her guide/father and became a guide herself at 17.  She and Johnny Pares manage the two privately owned lodges www.casablancafishing.com

I had wondered (doubted really) my casting ability for this trip in the uncharted salt flats….I fight the wind, I have not yet learned to double haul, and have not had much practice with anything heavier than a 7 wt rod, and have yet to land a fish over 5 lbs on a fly, but then you don’t get ahead by waiting.

To say Rene was patient is an understatement!  I won’t go into all my shenanigans here that I employed and my shock when that first bonefish took off….taking 1/2 the rod!  But  I will say that in 6 days Rene uttered  “Casta More Longer!” more than a few times. Now if you wish, to come in a little early from fishing one day you can enjoy a field trip on the island.

Then it is back to fishing…..

Conservation and respect for the area, it’s inhabitants and natural resources are evident.  This biosphere contains the 2nd largest barrier reef in the world and is also home to abundant flora and fauna; there were a pair of nesting Osprey not 100′ away from our cocktail area, I spotted Roseate Spoonbills, Brown Crested Flycatchers, Royal Terns as well as the beautiful Mangrove Warbler for my “life list”.  The jaguar, a once iconic symbol of greatness to the Mayas as ‘king of the forest’ is now in  serious danger of extinction. A friend sent me the above photo of artistic antlers from her trip to New York over Thanksgiving as well as the one below……. and thanks to Suzie at Urban Country Style http://urbancountrystyle.com she identified the beautiful deer damask paper from Barneby Gates http://www.barnebygates.com

I like to work with new and vintage antlers and create a custom look – I have worked with fabric on my Black Forest style mounts for clients too- but just a little more traditional in my approach.

Is there room for creativity in the traditional antler mounting world….what do you think?

A South African still life I made from vintage horns I have re- purposed for new life in linen.

BlackBerry is a beautiful black distressed finish with highlights of red & umber that compliment black horns.

Old World White is a white patina finish that looks terrific with naturally sun bleached antlers & as an elegant contrast to colored walls or stone.

All of these are available on our products page http://www.HeritageGameMounts.com

Once favored as small bore paper shooting targets- these colorful old targets have come alive again as sporting art for the gentleman’s study.

Artist, Rita Schimpff discovered some of the original images Patented in 1897, at an antiques fair and thought they were so handsome she just had to have them.  Later she decided she did not want to seperate the originals that came together on large sheets, so she had them reproduced and she decoupages them to pine disks she stains and stripes in black for a “Biedermeier’ look.

The original old chromolithographs were produced by Forster-Hoppe of Zeitz, Germany and come in 6 images and 2 sizes- perfect to hang in groupings or stand in a table easel.  Visit http://www.HeritageGameMounts.com to see all of these and her distinctive antler mounts.